In its simplest form, craniosynostosis occurs when one of the normal joints of the skull fuses or closes prematurely leading to abnormal skull growth. These skull joints, also called sutures, act as expansion joints, allowing the skull to grow rapidly in the first years of life. This rapid growth is driven in part by the brain which typically grows to 70-80% of adult size in the first 2 years. Normally, the sutures begin closing after the major period of brain growth, when a child is around 2-3 years of age. This normal closure process continues into adulthood. 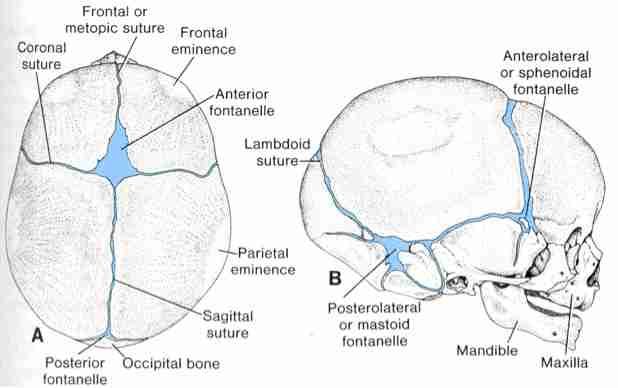 When one of the sutures fuses prematurely, however, the skull cannot grow normally in response to the expanding brain. This, in turn, leads to very characteristic patterns of abnormal skull growth depending upon which suture or combination of sutures is fused. There are 4 sutures that are most frequently involved in craniosynostosis. These include the

Craniosynostosis is likely caused by a combination of environmental, hormonal and genetic factors that make the skull suture a little more likely to fuse. However, our understanding of what causes craniosynostosis is not complete.

For children having craniosynostosis involving a single suture, it seems that the most common cause is environmental. In essence, while a baby is in the womb, the head may become wedged in a tight spot, putting pressure on the skull and impairing skull expansion. This may, in turn, signal to the skull bones that growth is nearing completion and that it is time to begin fusing the suture. This theory, sometimes referred to as “in utero constraint”, is supported by animal models where craniosynostosis may be induced by intentionally restricting skull growth while the animal is still in the womb. This theory is also supported by the finding that craniosynostosis is slightly more likely to occur during twin pregnancies, where the babies are tightly constrained within the uterus.

Although it is rare for single suture craniosynostoses to be passed from generation to generation in families, there are some reports suggesting heredity may play a role. A number of genes have been identified which may lead to an increased risk of craniosynostosis. However, it seems most likely that these genes serve a “helper” role, perhaps making the sutures a little more likely to fuse when other necessary conditions (such as inutero constraint) are present. Genes are more likely to play a role in complex pattern craniosynostosis and craniofacial syndromes.

It has also been observed that single suture craniosynostosis occurs more frequently in boys than girls, suggesting a possible hormonal mechanism in promoting early suture fusion.

The possibility of elevated intracranial pressure and the worrisome effect elevated pressure may have on development and intelligence continues to be an area of interest for researchers and a driving force behind surgical treatment of craniosyostosis. At present, it appears that a majority of children with single suture craniosynostosis have normal development and intelligence. However, more research is needed to elucidate these issues further.

On physical exam, your craniofacial surgeon will assess the overall shape of the skull, measure a head circumference and feel the soft spots (or fontanels) to see if they are open or closed. In addition, your surgeon will check to see if there is any visible or palpable ridging over the sutures of the skull. Ridging refers to raised areas of bone that follow the course of the sutures. As a suture begins to fuse, ridging that may be seen or felt is a common diagnostic sign of craniosynostosis. However, the lack of visible or palpable ridging does not rule-out craniosynostosis.

Although the vast majority of craniosynostosis diagnoses may be made by physical exam alone, X-ray studies may have a limited role in confirming a diagnosis where it is unclear whether a suture is fused. In these rare instances, a CT scan of the skull is probably the best radiologic test for evaluating the cranial sutures. However, we encourage parents of all children suspected of having craniosynostosis to be seen by a craniofacial surgeon prior to any diagnostic imaging since these studies may be unnecessary.

In addition, when multiple sutures are involved or when a craniofacial syndrome is suspected, genetic testing and consultation may be recommended.

Although the timing of surgery can be highly individualized depending on the sutures involved, surgical correction of craniosynostosis is most often done between 6 and 12 months of age. Surgery is usually performed through a scalp incision that lies conealed within the hair of the head. Your craniofacial surgeon will work in concert with a pediatric neurosurgeon in order to safely remove the bones of the skull. Then, the craniofacial surgeon reshapes and repositions those bones to give a more normal skull shape.

When only one suture is fused, it is likely that only one surgery will be required to correct the abnormal skull shape. When multiple sutures are involved, as in craniofacial syndromes, children often require multiple skull surgeries during the course of childhood and adolescence.

You can find out more about which cookies we are using or switch them off in settings.

This website uses cookies so that we can provide you with the best user experience possible. Cookie information is stored in your browser and performs functions such as recognising you when you return to our website and helping our team to understand which sections of the website you find most interesting and useful.

Strictly Necessary Cookie should be enabled at all times so that we can save your preferences for cookie settings.

If you disable this cookie, we will not be able to save your preferences. This means that every time you visit this website you will need to enable or disable cookies again.

This website uses Google Analytics to collect anonymous information such as the number of visitors to the site, and the most popular pages.

Please enable Strictly Necessary Cookies first so that we can save your preferences!